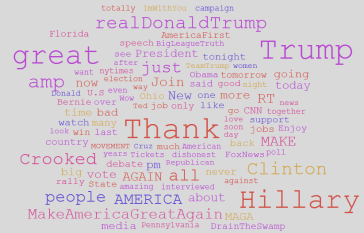 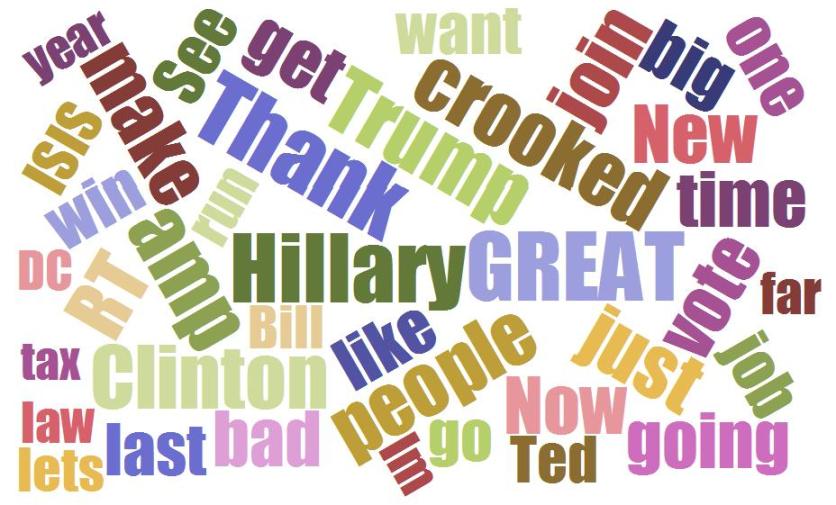 So, what’s going on here?  I downloaded all of The Donald’s tweets from March 5, 2016 to today (January 13, 2017–Friday the 13th).  I went back to March because something about twitter limits downloads to 3200 entries.  I think it’s enough, though.  Then I ran the text of those emails through a few word cloud generators and produced the images above.

The first thing that stood out to me was the word “Thank.”  It shows up a lot.  I wasn’t expecting that.  I did some word counts in Microsoft word, based upon the word clouds, and found the following.  First of all, the most common word is actually “Trump.”  It shows up 1123 times.  But, it often shows up in twitter names, like @realDonaldTrump (270 times)  If we subtract this latter reference, that brings our total down to 853, but a lot of these may be twitter names of his children and such.  Anyway, I’m going to use the number 853.  Therefore, the top ten words in these Trump tweets are these:

But, of course, the last two might not make the list.  What interested me is, apart from the sloganeering (“Make America Great Again” and “Crooked Hillary”), was, what was the man interested in tweeting about?  “New” seems to often refer to New York, New Jersey, or news.  Therefore, I think the things most on Trump’s tweet-mind this last year have been:

Although people are on the bottom, I am glad that they made the list.