The Dakota Pipeline protesters seem to have run out of luck.  One lesson seems to be, Be very careful who you let into the country.  At least, that seems to be the marching orders for the Secretary of Homeland Security.  It looks like he’s ready to get started on that wall to the south.  United States Customs and Border Patrol

“shall immediately begin planning, design, construction and maintenance of a wall, including the attendant lighting, technology (including sensors), as well as patrol and   access roads, along the land border with Mexico…”

I haven’t seen the Request for Proposal yet, but I haven’t really looked for it, either.  I hope they get the lighting right.  It really makes all the difference.
Did you know there’s a map of hate groups in the United States?  (There’s also a report, if that’s more your style.)  Some are just armchair haters and others are a bit more nasty.  Most of them would like the immigrants to go away.  I didn’t see any Native American groups listed, though.  Here’s the worst part for me.  The state with the most hate groups?  California!  That’s right, California.  Man, I hate that. 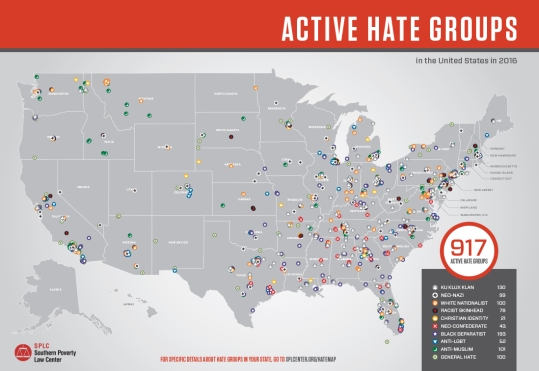